Disabled by default, predictive DRS works together with VROPS to make DRS proactive instead of
reactive.The way that it works, VROPs computes and forecasts vm utilization (both cpu and ram) based on data received from the vCenter server. In turn, DRS receives the forecasted metrics 60 minutes ahead of time in order to balance the loads prior to contention. 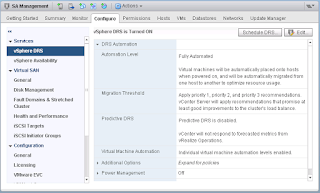 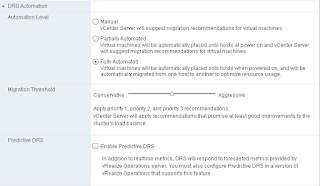 VM distribution is used to prevent less vms from restarting due to a failure by distributing the
number of vms more evenly. If DRS detects a severe performance inbalance, it will correct the
performance at the expense of the even distribution of vms.

Memory Metric for Load Balancing: By default, DRS uses active memory + 25% as the primary
metric. This new feature dictates that consumed memory should be used intead.

CPU over-commitment: Use this option to enforce a maximum vcpu vs lcpu ratio. Once the limit is reached, no new vms are allowed to power on on that particular host. According to the documentation, 500 is equals 5 vcpus x 1 lcpu. 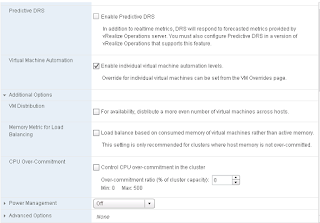